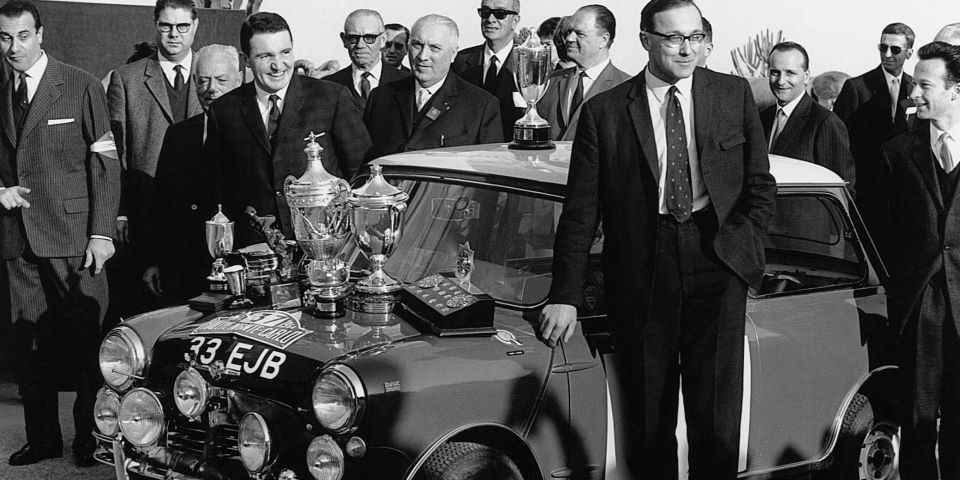 Against All Odds: Paddy Hopkirk

In A Mini Cooper Wins The Monte Carlo Rally, 55 Years On

One of the reasons why many of us enjoy watching sport, no matter the type, is that it sometimes throws up great stories that provide us with memories that last a lifetime. They may even perhaps inspire us to take up something – Paddy Hopkirk and his Mini Cooper winning the Monte Carlo Rally was one such moment.

As a world-leading supplier of Mini parts and a supporter of classic rallying here at Minisport, we are constantly helping fellow enthusiasts to repair, restore or to reimagine their own Minis – their love of this great motor innovation inspired by the reputation and memories it evokes.

With January 2019 marking 55 years since Paddy and his co-driver, Henry Liddon, won the illustrious event (sealing The Mini as a true icon of British culture and innovation in motorsport) – to celebrate, we’re going to drive back in time and relate those special moments leading up to (and after) the historic win.

Those wonderful stories provided by sport may be framed by a certain narrative – the participants are simply a favourite of ours and or it’s an underdog story; people say they cannot win – but we want them to win! The Mini Cooper was the latter, and soon became the former – the underdog that quickly became the favourite of many.

The Mini was beginning to make waves in the British car market in the early 1960’s; small and compact, its size was somewhat misleading as its 850cc engine could get the most from a fuel tank, making it an extremely economical drive. These attributes attracted John Cooper, owner of the famed Cooper Car Company; designers of already-successful Formula One cars.

Coincidentally, John’s friend, Alec Issigonis, was the designer of the original Mini and lobbying the brand’s owner, the British Motor Corporation (BMC), of its potential racing abilities, John was commissioned to work alongside Alec to create a Mini that could compete in top-level motorsport.

As portrayed in the advert we collaborated on with the modern-day Mini company, John was told regularly that the prospect of getting this tiny vehicle to compete in road racing ‘can’t be done’. How wrong they were – the original Mini Cooper saw the engine upgraded to 997cc, with other significant works including the addition of twin SU carburettors, a closer-ratio Mini gearbox and front disc brakes, which were very uncommon in such small cars at the time.

Released in a thousand units 1961, the Mini Cooper was designed to meet the rules of Group 2 rally racing. The abilities of this new Mini soon captured attention – in 1962, whilst driving a Mini Cooper, John Love (from Rhodesia, modern-day Zimbabwe) became the first non-British driver to win the British Saloon Championship. A growing reputation that soon would be known all around the world...

The Mini Cooper S: The Beginnings of a Racing Icon

Whilst the original Mini Cooper instantly proved successful, to get it winning on the world stage required much more work – a fact that John Cooper was already well aware of. Encouraged by the success, the BMC commissioned Cooper to design an even sportier version that would offer a significant improvement.

The Mini Cooper S model was completed by late ‘63 – its 1071cc engine supplemented its power and the addition of a nitride steel crankshaft and strengthened bottom end allowed for further tuning. By the time the model was updated in August 1964, it had sold over 4,000 units – later, it would sell even more. All thanks to its rallying success earlier that year...

Up Against It In The Monte Carlo Rally

With a bodywork colour identified as ‘tartan red’ with a white roof, the Mini’s dispatched by the BMC Works team for the 1964 Monte Carlo Rally were not considered as serious contenders. Despite the new Mini Cooper S having a four-cylinder engine with the aforementioned stroke capacity of 1071cc, it was considered somewhat ‘modest’ in a field that had the likes of Mercedes-Benz 300 SE’s and Ford Falcon’s – with their six-cylinder, V8 engines; as much as FOUR times as powerful as the engine in the Cooper.

The rally began, as was tradition at the time, from nine European cities before converging on Reims, in Northern France to begin the race down to Monte Carlo. Whilst two other Mini crews started in Oslo and Paris, Paddy and Henry began their journey from Minsk in the USSR (now in modern-day Belarus). Being January, you can probably imagine the conditions – snow everywhere.

Thankfully, all of the Mini’s – and another 270 entrants – made it to the start line in Reims. The first stage would go true to form; Bo Ljungfeldt’s Ford Falcon would roar to the top of the leaderboard – but a small red car with a white roof was right behind; Paddy Hopkirk and his Mini Cooper S.

If the Mini’s great performance could be put down to the terrain of the stage and the many brake changes that interrupted the flow of the bigger engines, the next leg would leave it at a huge disadvantage – mile-long, flat-out sections that would allow the bigger cars to really put on a show. Paddy refused to let his rivals build up a significant advantage though; the famous ‘Night of the Long Knives’ would be the stage of reckoning...

The Night of the Long Knives – The Stage of Reckoning

Run from La Bollene-Vesubie to Sospel (or vica versa) part of this route is driven over the Col de Turini – a famous mountain pass road with tight hairpin bends. Just to add more difficultly, The Turini takes place at night, with the headlights of the cars ‘cutting through the night’ (hence the stage’s evocative nickname!)

With snow falling all around (just to make it that more treacherous!), Paddy knew that this was a great opportunity to catch up to the lead. With plenty of practice and preparation already in place, the ability of the Cooper to negotiate downhill routes would help it to make up time it had lost to the faster cars.

Thanks to his great handling and correct tyre choice, Paddy Hopkirk’s Mini breathtakingly took the lead on The Turini – the snow and the downhill drops slowing down the bigger cars, whilst the Mini flew through them.

It would remain tight all the way to finish though, as Ljungfeldt would speed through the final stage, posting the fastest time. Squeezing every drop of mechanical sweat out of his Mini, Paddy Hopkirk managed to hold on to his overall lead, sealing a memorable win. A win that he didn’t immediately know about – with nothing in the way of GPS, a mobile phone or even a decent radio, the times had to be added up manually and in the end, he had to be told by journalists that he had won, causing the biggest upset that the Monte Carlo Rally has probably ever experienced.

The win made immediate headlines in the UK; Paddy was even flown back after the race to appear on ‘Sunday Night at the Palladium’ to be interviewed by Bruce Forsyth. He received a telegram from Prime Minister Alex Douglas-Horne, congratulating him on the success. The Beatles even sent him a congratulatory photo!

This publicity train would continue for years to come (and still does, even 55 years later!), as Paddy and his Mini toured BMC factories across the country and gave countless interviews about the race. By the following Monte Carlo Rally (which was won by Timo Makinen, also in a Mini Cooper), the Mini became the ‘must have’ car for anyone and by the end of the 1960’s, its image as a ‘British icon’ was secured.

Today, Paddy is still very-much in demand by Mini fans of all ages. And it’s this that makes the Mini so timeless – the ability it has to capture the imagination of people who are far too young to remember when the Mini was a staple of the roads and top-level motorsport, but are still attracted by the prestige, the history, the memories and the stories it has.

Oh, and it’s a decent drive too!